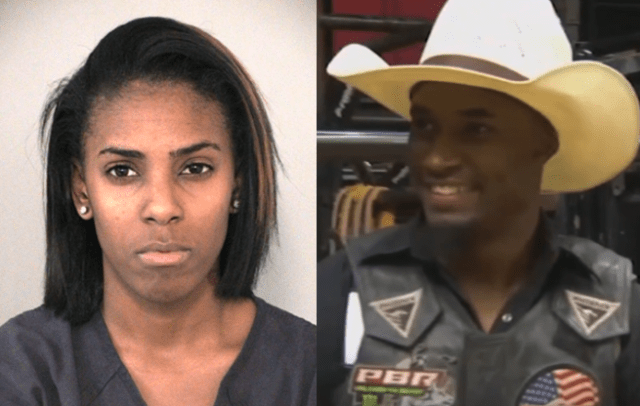 SALT LAKE CITY – Law enforcement authorities in Utah have charged a woman with murder after she reportedly shot and killed her professional bull-riding boyfriend.

Police in Salt Lake City, Utah, obtained an arrest warrant charging Lashawn Denise Bagley, 22, with one count of domestic-violence murder and nine counts of felony discharge of a firearm. She is accused of killing Demetrius Omar Lateef Allen, 27, who is known professionally as Ouncie Mitchell.

Allen was shot several times outside Bagley’s apartment on Sept. 12, 2022. He died at a nearby hosptial. After initially being released from custody following the homicide, she is now booked on the listed charges at the Fort Bend County Jail, according to online records, Law&Crime reported.

SLCPD described the couple’s relationship as “on and off.” They say Bagley opened fire while on the phone with 9-1-1, according to a statement released Saturday.

“Bagley, who lived at the apartment where the shooting took place, called 9-1-1,” police said. “While on the phone with Bagley, the 9-1-1 operator heard loud noises and asked about the noises. Bagley, according to court documents, said ‘I’m shooting’ and told the 9-1-1 operator she was out of bullets.”

Investigators determined that Allen was staying at Bagley’s apartment and returned to retrieve equipment valued at approximately $10,000.

“The investigation revealed Bagley shot her handgun multiple times,” police said. “Detectives believe Bagley was upset with Allen because of his interest in Bagley’s friend.”

Bagley was initially arrested and subsequently released from custody during the outset of the investigation. Once detectives completed their work, the case was reviewed by prosecutors who chose to charge the woman. Hence, detectives obtained an arrest warrant and she was taken into custody by the U.S. Marshals Service in the Houston area.

“We were prepared for the arena,” Allen’s aunt Kamilah Mitchell told KTRK. “But for him to be taken from us by a gunshot, that was something we couldn’t imagine.”

“This year was Christmas, but it didn’t seem like it was Christmas without Ouncie,” his grandmother Mintie Mitchell said.

Allen grew up near Houston, Texas, and had been riding animals since the age of 2. He also has a 5-year-old daughter, according to the outlet.

In court documents seeking a no-bail hold, detectives wrote, “the impulsiveness of the defendant’s actions and her wiliness to fire a handgun at unarmed persons whom she knew and was friends with at the time, demonstrates that she is a danger to the community.”

It was unclear when Bagley is next scheduled to appear in court.