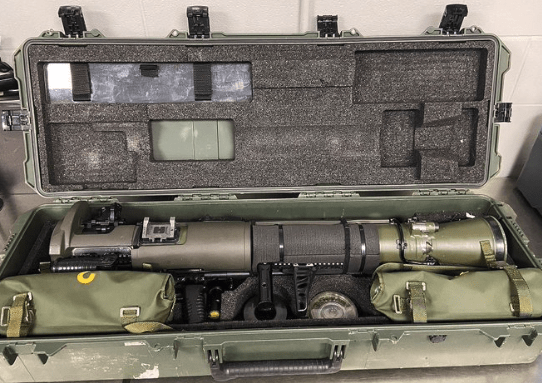 SAN ANTONIO – Personnel with the Transportation Security Administration discovered an undeclared, 84mm M4 rifle in outbound checked luggage Monday at the San Antonio International Airport, according to a tweet from the federal agency. The owner of the weapon was identified as a person using it as an exhibit during the SHOT show, which is currently taking place in Las Vegas.

A spokesperson for the TSA said the weapon was secured in checked baggage but hadn’t been declared with the airline, as is required with all weapons, NBC DFW reported.

The owner of the luggage was identified, located and subsequently escorted to an office, a spokesman with SAPD told Fox News Digital.

The unnamed owner said the weapon is a de-militarized 84mm Carl-Gustaf M4 recoilless rifle. It was to be used as exhibit/demo item at the SHOT show taking place in Las Vegas Tuesday to Friday of this week. The individual also identified the steps taken to “demilitarize” the prop and produced company paperwork to that effect.

An explosives specialist with TSA confirmed the owner’s explanation and determined it was no longer able to be used. Nevertheless, a TSA supervisor said the prop firearm would not be permitted aboard the aircraft.

Law enforcement authorities allowed the owner to have a family member respond to retrieve the weapon. He then rebooked his departing flight.

TSA said whenever weapons are found at the airport their agents contact local police. The San Antonio Police Department will determine the next steps in each case, according to NBC DFW.

Currently, no charges will be filed in the case involving the 84mm M4 rifle. However, fines are issued by TSA regardless of any action taken by local law enforcement. The traveler will typically learn the amount of any fine by letter after mitigating circumstances and prior offenses are taken into consideration.

Meanwhile, authorities used the incident to remind travelers how to transport firearms and ammunition, Fox reported.

“Firearm owners may transport unloaded firearms in a locked, hard-sided container as checked baggage only,” according to the TSA website. “They must declare the firearm and/or ammunition to the airline when checking their bag at the ticket counter. The container must completely secure the firearm from being accessed. Locked cases that can be easily opened are not permitted.”