Home » Trump Argued Rape Was Not A ‘Distinct Injustice.’ The Court Did Not Agree.
Legal

Trump Argued Rape Was Not A ‘Distinct Injustice.’ The Court Did Not Agree. 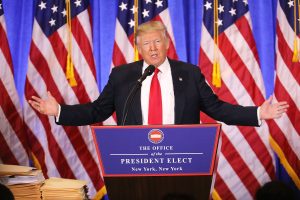 Last week, Donald Trump’s lawyers made the bizarre argument that sexual assault is not a “distinct injustice,” and thus New York’s Adult Survivors Act, which revives time-barred claims for adult victims of sexual assault, was unconstitutional.

This particular bit of ugliness came up in the former president’s longstanding defamation litigation with advice columnist E. Jean Carroll, who accused him in 2019 of raping her in the mid-90s, after which he called her a liar, accused her of participating in a hoax, and implied that she was too unattractive to assault.

After months of  ducking process and claiming presidential immunity, then-Attorney General Bill Barr removed the case to federal court under the Federal Tort Claims and Westfall Acts. After a detour to the Second Circuit, the issue of whether Trump was acting within the scope of his duties under DC law when he made the allegedly defamatory statements was certified to the DC Court of Appeals, which heard argument on the issue this week.

But in the meantime, the state of New York passed the Adult Survivors Act in November, after which Carroll filed a second suit, adding a battery claim and a second defamation count, since Trump was unwise enough to repeat the same language in October when he was a civilian.

Trump’s legal team of Alina Habba and Michael Maddaio moved to dismiss the case, arguing that the ASA is unconstitutional under New York law because it “does not remedy any specific, identifiable injustice, but merely provides a second bite at the apple for claims that have been long since waived.” They contrasted the law with the recently upheld Child Victims Act (CVA), which created a two-year claims revival window for child sexual abuse victims, arguing that the, while child abuse is a “distinct injustice,” while rape of an adult woman is somehow not. Or at least that there’s no legislative record to substantiate a claim that the legislators thought so.

This line of reasoning did not play well with US District Judge Lewis Kaplan:

To suggest that the ASA violates the State Due Process Clause because the Legislature supposedly did not describe that injustice to the defendant’s entire satisfaction in a particular paragraph of a particular type of legislative document – itself a dubious premise – is absurd. There is not a single word in the New York Due Process Clause to support that suggestion.

Noting the the ASA passed unanimously in the state Senate and 140-3 in the Assembly, the court quoted from the Justification section of the legislative memorandum submitted with Assembly version of the bill:

This legislation, the Adult Survivors Act, would create a one-year window for the revival of otherwise time-barred civil claims arising out of sexual offenses committed against people who were 18 or older at the time of the conduct. Those who have had justice denied them as a result of New York’s formerly insufficient statutes of limitations should be given the opportunity to seek civil redress against their abuser or their abuser’s enablers in a court of law.

“Even if the factual premise of defendant’s argument were correct, and it is not, defendant’s position would reflect a disregard of the wealth of additional evidence of the Legislative purpose in enacting the ASA well as a parsimonious approach to determining the purpose of the ASA that is inconsistent with New York law,” the judge went on.

As for the claim that Carroll’s defamation suit should be dismissed because she failed to plead special damages, the court suggests that Trump’s lawyers are simply confused on the difference between libel and slander. Ouch.

So the case will not be dismissed, nor will the court be granting a stay of discovery. We can move directly now to an argument about whether Donald Trump’s deposition should remain sealed or can be filed on the public docket — a topic which has rapidly descended into aggressive filings on both sides.

On the plus side for Trump’s legal team, Judge Kaplan didn’t threaten to sanction them for filing such a dumb motion to dismiss, as New York Supreme Court Justice Arthur Engoron threatened to do earlier this week. So, all in all, it’s a bigly win for Team Trump!

Liz Dye lives in Baltimore where she writes about law and politics.