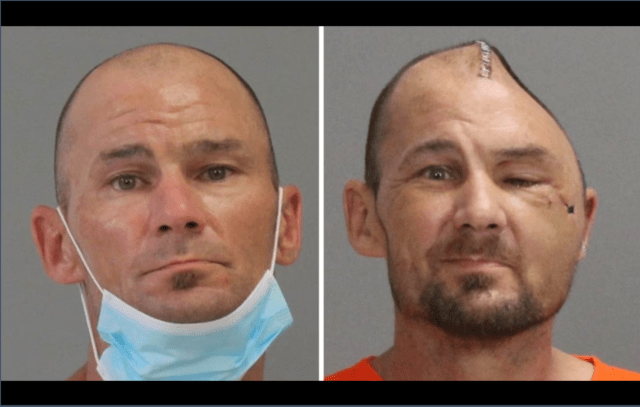 BENCHLEY, Texas – Texas police released a new booking photo of a suspect who is accused of shooting two law enforcement officers in a 12-hour period on Dec. 29 and 30. The man was subsequently struck by police gunfire when he was taken into custody. He is now out of the hospital after being treated for a gunshot wound to the head.

Joshua Ryan Herrin, 44, from Bryan, Texas, was identified as the suspect. The sequence of events began Thursday, Dec. 29, but culminated just about noon Dec. 30 when a Brazos County deputy saw Herrin driving a stolen 2004 Mustang. He eventually bailed from the vehicle and fled from authorities by running into a rural area in Benchley, KWTX reported.

As Herrin fled, the deputy was struck in the arm by gunfire. Although details of the encounter remain unclear, the news outlet learned that she was hospitalized in stable condition and expected to recover.

Meanwhile, Bryan police say that during the 3-hour manhunt, police returned fire and struck Herrin. He was subsequently found in an area west of the Aggie Bonfire site in Robertson County and taken into custody before being transported to the hospital.

He is facing a slew of charges and remains in custody on a $2 million bond.

🔴Exclusive video: The Bryan man accused of shooting two law enforcement officers in a 12-hour period is now at St. Joseph hospital in Bryan being treated for a gunshot received prior to his arrest in the Benchley area.

A new booking photo released by police shows Herrin suffered a devastating wound to his head.

Details of the shooting the led to Herrin’s injuries and arrest were not immediately available, but several law enforcement agencies converged on the Benchley area to assist with the manhunt until he was captured, according to KBTX.

Herrin was previously the focus of an area-wide search following the shooting of a Bryan police officer twice Thursday night, Dec. 29, near Wayside Drive and Avondale Avenue.

According to police, the officer attempted to stop Herrin who was driving a pickup truck. During the encounter, authorities say Herrin jumped out of the vehicle and took off running while firing several rounds at the officer who was struck once in the arm and once in the leg. Investigators say Herrin then stole the officer’s patrol unit.

The unnamed officer was transported to the hospital. He was listed in stable condition and expected to recover.

Herrin abandoned the patrol unit on Fountain Avenue near Finfeather Road. Police and other people with knowledge of the case say Herrin then broke into an auto body shop and stole the Ford Mustang as well as a firearm from inside the business. The suspect was later spotted by the Brazos County deputy in possession of the stolen vehicle, which subsequently led to the shootings and, and ultimately, his capture.

According to KWTX, the wounded Bryan police officer thanked his fellow law enforcement officers for their assistance in a Facebook post on Saturday, Dec. 31. He also thanked his fiance who was working as a dispatcher when he was injured by gunfire. “I’m healing in the hospital and should be released here soon,” he noted.