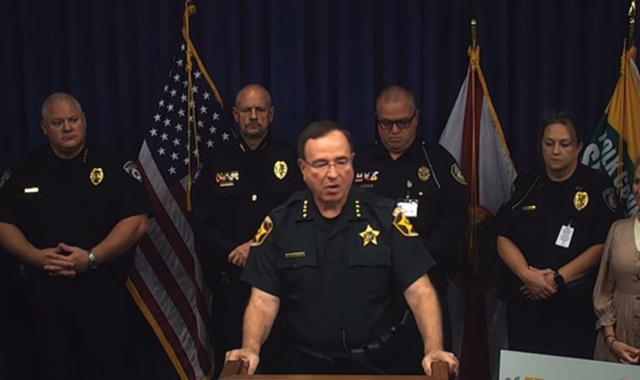 (Police Law News) – Law enforcement agencies are typically led and managed by either a Chief of Police or a Sheriff. The range of authority and ability to implement crime control strategies in a jurisdiction are vastly different depending on which model of leadership the agency has.

In some jurisdictions the public persona of a police leader is meek and embarrassingly almost deferential to the criminal element and anti-police activists in a community. This style of ‘leadership’ has been highlighted by recent examples of police chief’s banning the Thin Blue Line flag after loud criticism from the small percentage of people who literally complain about everything that causes them the slightest perceived inconvenience.

In other jurisdictions brash and unapologetic Sheriffs conduct press briefings like I imagine a modern-day John Wayne would. Criminals are called out by name and if someone complained about the Thin Blue Line flag – they would probably record the conversation and turn it into a re-election commercial – highlighting the “karens” that are seeking to destroy their jurisdiction. In these communities there is no confusion – those who are seeking to victimize residents – are the enemy – and they actively being hunted by well trained members of law enforcement.

In this article I explore why these differences in police leadership exist.

Under this model of leadership the Chief of Police is tasked with implementing the crime control strategies and management philosophy of police employees as directed by the mayor. A Chief of Police has as much authority to run the daily operation of the police department as is allowed by the politicians that have appointed him/her. In short, a police chief serves at the pleasure of the mayor and can be replaced at any time.

Counties utilize the Sheriff model. A Sheriff is an elected official. A Sheriff generally is able to manage the department and implement crime control strategies of their choosing. A Sheriff is held accountable by the voters at the end of their elected term.

Therefore, a Sheriff generally has greater range of authority than a Chief of Police. Of course there are exceptions like former Chief Bill Bratton (who at different points in his career led both the NYPD and the LAPD). Chief Bratton had the star power and leadership experience and therefore the luxury to only take police chief jobs where he would be allowed great authority and autonomy to manage the police department.

I have had thoughts about the differences between police chiefs and sheriffs for some time but it was the recent controversy of the Thin Blue Line flag that pushed me over the edge of annoyance and I had to finally take this issue to the train station.

In a recent article we documented the controversy and backlash of the LAPD police chief banning the Thin Blue Line flag from city property after complaints from anti-police activists and the San Francisco police chief not allowing officers to wear Thin Blue Line masks during the pandemic (read it here).

One of the important points of this flag controversy is that it is unknown if the decision to ban it from public buildings and on face masks was from the police chief or if it was a directive from the mayor. It is plausible that the “Diversity and Inclusion” section of the city administration ordered the LAPD chief to enforce this directive on the flag and that the police chief had no choice. In that situation the police chief can argue behind closed doors but their employment is tied to implementing the policies that the mayor’s office prefers.

The frustrating thing for citizens is that we have no idea who made the final decision and cannot get an honest answer from the chief of police until they have completely retired from law enforcement and are not seeking any future employment.

The most interesting interviews in this respect are retired police chiefs who have been forced for decades to not only implement bad/ineffective crime control policy but defend those policies in the media. When they finally retire and have the privilege to be honest – it explodes like water from a rogue fire hydrant. It’s a therapy session for the retired police leader who often is trying to come terms with how their career matched the expectations and wonder of a naive 22-year-old police recruit that wanted to save the world. (*Watch one such interview here with retired two-time police chief from New Mexico – Mike Geier*).

Alternatively, with a Sheriff there is simply no confusion on who made the decision. For better or worse a Sheriff does not have the luxury to install a public puppet regime and wield power from the shadows. When Maricopa county Arizona Sheriff Joe Arpaio forced inmates to live in outdoor “tent cities” and made the male inmates wear pink uniforms – there was no confusion who was responsible for those policies. Sheriff Arpaio called himself the “toughest sheriff in America” and he was elected and re-elected to an unprecedented 24 years on the job (1993-2017).

So, what happens if a police chief has a disagreement with the mayor?

Ideally, in a situation where there is disagreement the mayor would defer to the police chief – who is the subject matter expert in this area. The same goes if the mayor had a disagreement with the Director of Solid Waste over some recycling logistics – hopefully the person appointed to lead that city department is competent and has the trust of the mayor or they should not be in that job in the first place. But ultimately, the mayor was elected by the citizens – not the police chief – so objectively the mayor should make the final decision.

Once that decision is made by the mayor – a police chief who publicly objects or refuses to implement a bad policy or decision is out of a job. The mayor will find someone else to implement their directives. The ironic part of this is – having the experience and knowledge to recognize a bad idea/public policy – is the exact kind of person that we want to lead police agencies. But if that experience is utilized under the wrong political circumstances – the chief is terminated. Therefore, a successful tenure as a police chief may just consist of not knowing good policy from bad or rationalizing the idea of playing along for the paycheck.

The struggle of rationalizing in a situation like this seems like it would be a normal human function.

. Imagine if you are a competent and well-respected police leader and the mayor (your boss) is either really stupid or a just a liar. And you know deep down that you are mitigating the mayoral incompetence and the citizens of the jurisdiction are better off with you than with your likely worse replacement. Then it appears that the moral thing would be to rationalize this and stay the course. I imagine this is exactly the internal conflict that many Trump appointees faced during his term.

It would not be unreasonable for a police chief to think, “The policy will be same with or without me. At least if I am here I can mitigate the damage”. The risk is that after painful years of rationalizing and making excuses – what made the person a good police leader in the first place has been whittled away to nothing more than an empty blue suit with a huge pension.

The story of former Seattle Police Chief Carmen Best – is an example of a police leader who refused to rationalize awful political decisions and left with her integrity intact.

Carmen Best resigned from her position as the Seattle Chief of Police in 2020 – in the midst of protests against claims of police brutality in her city and across the country.

Chief Best announced her resignation after the city council approved a proposal to cut the police department budget by $4 million and eliminate as many as 100 officers from the police force. To show how crazy the politicians in the city are – the council had (at one point) considered cutting the police budget in half.

Chief Best remarked, “I believe 100% that they were putting me in a position destined to fail. Cutting a police department that already had low staffing numbers, that was already struggling to keep up with the demand,” in an interview with NPR. Chief Best also dared to also ask the question, “How are we going to provide for adequate public safety in that environment?”

Chief Best claimed that she was excluded from conversations around reimagining the future of policing in Seattle, which made it “very difficult to move forward and make the changes needed to move the department in the right direction.”

Since the resignation of Chief Best the city has fell into a predictable decline. Crime rates are at all-time highs and the city is now desperate to hire back police officers.

After the “defunding” hundreds of Seattle police officers retired early or transferred to different law enforcement agencies. Again, why would anyone want to undertake a dangerous job in a community that values criminals over cops?

Currently, the city of Seattle is offering a 30k$ “sign-on bonus” for any certified police officer from the around the country to transfer to Seattle PD. Just to put that in perspective – thirty thousand dollars just for joining a police department is unheard of in the world of police employment. Most police departments offer ZERO dollars.

“Defunding” the Seattle police department was bad public policy implemented by people who are privileged enough to live in neighborhoods where walking to the corner store is not a dangerous activity. And the hard-working normal citizens of this city are the victims of the bad policy. And they are the ones who will be paying the price for awful leadership with their tax dollars and spilled blood.

Chief Best made the decision to jump off the ship – while issuing a public warning that should have been taken seriously. But it wasn’t.

Sheriff Judd has been elected to this post in Polk county Florida since 2005 and he routinely holds press conferences where he is brutally honest with the public. In a recent media appearance he referred to a homicide offender that his deputies arrested as an, “evil, violent, murdering piece of trash” and said that a property crime offender that was caught, “may be the dumbest guy on earth.” Sheriff Judd makes these comments while holding up large pictures of the unfortunate criminals that get caught in his county.

Again, you can agree or disagree with his style. But, we should at least appreciate the honesty and the citizens in this jurisdiction know that the buck stops at the door of the Sheriff’s office.

In general a Chief of Police serves at the discretion of the city mayor. A Chief of Police may have great ideas and be a strong leader, but he/she literally has to do exactly what the mayor wants and if they don’t the mayor will replace them with someone who will. There are some excellent police leaders who are simply not allowed to demonstrate their innovation in policing and crime control. This is not a blanket defense of police chief’s but context is important.

This article originally appeared at Police Law News. We encourage you to follow this excellent resource.