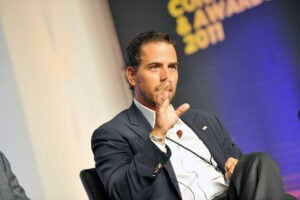 Oh, thank God, our long national nightmare is over! With Republicans back in charge of the House, we’ll finally have politicians in charge willing to tackle the important priorities. No, not health care or the economy, you fool. What the American people really care about is fining out why Twitter didn’t let them see Hunter Biden’s penis for one day in October of 2020!

With the Oversight gavel in hand, Kentucky Republican Rep. James Comer has announced his plan to dedicate himself with monastic devotion to probing the lab leak theory of coronavirus origination, the border crisis, and, most importantly, the supposed crimes committed by President Biden and his family.

What crimes might those be? Rep. Comer will be be happy to tell you:

Interesting! Because yesterday, the Trump Organization’s CEO was sentenced to five (piddling) months at Rikers thanks to a years-long tax avoidance scam, and the former president and his three adult children are all facing fraud charges in New York. But not a single member of Biden’s family, much less the president himself, has faced any charges. And not for lack of investigation, either.

When Bill Barr controlled the Justice Department, he not only established an intake mechanism for Rudy Giuliani’s book reports on Joe Biden’s supposed ties to Ukraine, but he tasked a US Attorney in Delaware with investigating Hunter Biden and his much-hyped laptop. And yet, no charges were forthcoming. Which kinda suggest that there’s no there there. Hunter Biden is a screwup who traded on his family name, as did his uncle James Biden, in ways that are both unseemly and entirely legal — not to mention bog standard in DC? See also, Ginni Thomas, who sits at the middle of a network of conservative lobbyists despite being an absolute Froot Loop.

OR MAYBE THEY NEVER GOT INDICTED BECAUSE THE DEEP STATE IS IN ON IT!

In any event, Rep. Comer intends to find out — or at least to use his megaphone to make a lot of implications, even if proof of wrongdoing remains elusive. Yesterday, he sent a letter to Treasury Secretary Janet Yellin demanding Suspicious Activity Reports relating to several members of the president’s family, as well as their business ventures and associates, plus any information which might prove that the Biden administration suppressed it. Hey, remember five minutes ago when Republicans claimed there was no legitimate legislative purpose for the Ways and Means Committee to see Trump’s tax returns? LOL!

But mostly what they care about is Hunter Biden’s penis, and the travesty of Twitter supposedly censoring information about it. Toward that end, they’re planning a public hearing on February 6, at which they intend to interrogate multiple former Twitter officials about their “role in suppressing Americans’ access to information about the Biden family on Twitter shortly before the 2020 election.” They want former chief legal officer Vijaya Gadde, former general counsel James Baker, and former trust and safety head Yoel Roth to show up to get yelled at, despite the fact that the FEC already investigated and found that Twitter broke no laws in the handling of the laptop story because, as a private company, it can choose to publish or not publish anything it likes.

Comer has not demanded a public hearing with Steve Bannon, or dissident Chinese billionaire Guo Wengui, who appear to have deliberately injected this story into the media ecosystem in ways that made it impossible to verify the authenticity of the information on the supposed “laptop from hell,” causing every media outlet but the New York Post to pass on the story.

These next two years are going to be so unspeakably stupid. And we are all about to become intimately acquainted with every freckle and mole on Hunter Biden’s rear end — figuratively, and also literally. Party of family values, FTW.

Liz Dye lives in Baltimore where she writes about law and politics.