Not All Distressed Law Firms Screw Associates Out Of Bonuses 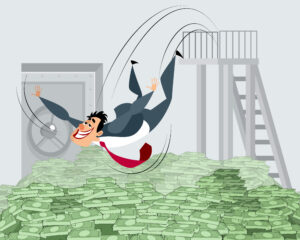 If you haven’t already subscribed to Above the Law’s podcast “Thinking Like a Lawyer,” then I highly recommend you subscribe to it as soon as possible. People often are too busy to read all of the articles on Above the Law during the week, and listening to the podcast is a good way to get up to date on the happenings in the legal profession. A recent episode of the podcast recounted how many law firms around the holidays made pathetic excuses to refuse paying bonuses and providing other additional compensation to associates. This was likely because law firms expect that 2023 may be a bad year for many shops. However, listening to the podcast made me think of my own experiences and how some law firms going through some tough economic times do not screw over their associates.

I once worked for a large law firm that employed several hundred attorneys across about a dozen offices. The law firm went through some difficult economic times, as was discussed in detail by articles on this website. Indeed, the law firm completely dissolved around a year or so after I left. Sensing that the shop was headed on a bad path, most of the partners in the office in which I worked decided to spin off our office into a new firm. The associates at the office basically all joined the new firm since they knew that they would be better off at the new shop than sticking around the old firm that was going to experience some difficult economic times.

The large firm I worked at assessed bonuses based on the number of hours an attorney worked in the preceding year, and based on that figure, I was due to be paid out tens of thousands of dollars. I really needed that money since I had just paid off my student loans, and I had used most of my savings to do that. However, for some reason, that law firm paid out bonuses on January 31 of the year following the year for which bonuses were assessed. I guess the law firm wanted to take the month or so between the end of the year and paying the bonuses to make sure that their math was correct and that people were getting the correct amount of extra compensation.

The only problem was that my last day at that firm was going to be January 31. For whatever reason, the bosses who left the large law firm did not want to wait any longer to start their shop, so they made our last day at that firm January 31, and our first day at the new firm February 1. This was a little distressing to me since I thought that my bonus would not be secure. The firm made absolutely certain to say that although bonuses would be based on the amount of hours an associate worked in the preceding year, this was nonetheless entirely discretionary. Indeed, some people would receive more in bonus money than their billable hours reflected based on exemplary work. As such, the large law firm had a lot of cover to deny us bonuses and make up some excuse about how we should not be paid a bonus on our last day of work in order to avoid paying associates hundreds of thousands of dollars in additional compensation.

To my surprise, when I looked at my bank account at the end of the month, I saw that the firm paid me all of the bonus I expected! I was absolutely floored that the firm actually paid the entire bonus, even though it was the right thing to do, because I just expected that law firms will try to screw associates any chance they get. Perhaps the law firm paid the bonuses in order to create goodwill with the shop, not only with the associates, but with the partners who were departing. Maybe the firm did not know how dire their financial situation would be in under a year, so they thought that paying several hundred thousand dollars in bonus money would not substantially impact their bottom line. For whatever reason, I was extremely grateful that the firm decided to do the right thing, and it definitely impacted my perception of the shop and its partners.

All told, when law firms go through tough financial times, they may be tempted to screw associates out of bonuses, and some might justify such actions based on the difficulties faced by the firm. However, not all distressed law firms disappoint their associates, and shops should rethink their positions when it comes to paying out bonuses and other compensation during tough economic times.

Jordan Rothman is a partner of The Rothman Law Firm, a full-service New York and New Jersey law firm. He is also the founder of Student Debt Diaries, a website discussing how he paid off his student loans. You can reach Jordan through email at [email protected].

Enter your email address to sign up for ATL’s Bonus & Salary Increase Alerts.