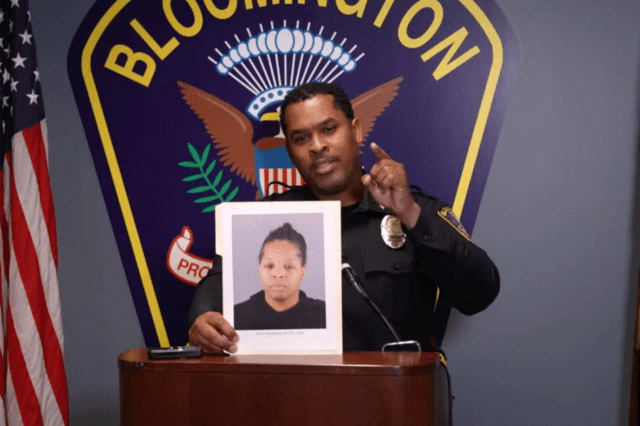 BLOOMINGTON, Minn. – A juvenile accomplice of the Christmas weekend homicide at the Mall of America and his mother have both been arrested.

Bloomington Police Chief Booker Hodges announced in a Tuesday news conference that Lavon Longstreet, 17, was arrested that afternoon in Decatur, Georgia, with the help of investigators, U.S. Marshals, and two sheriff’s offices.

Longstreet has been charged with second-degree murder and second-degree assault in connection with the killing of 19-year-old Johntae Raymon Hudson inside a Mall of America department store on Dec. 23. Two others in Georgia were arrested along with Longstreet, one for aiding an offender and another on an assault warrant.

Shortly thereafter, Longstreet’s mother was arrested in Golden Valley, Minnesota. Erica McMillan has been charged with aiding and abetting after she purportedly drove her son to Georgia after Hudson’s death.

“I said, anybody who helps him is going to get locked up,” the Bloomington police chief said. “If someone had murdered her son, I guarantee you she would feel differently.”

The arrests of Longstreet and McMillan bring the total number of people arrested in connection with the Mall of America homicide up to 7, though one of them was released from custody on Dec. 29 without being charged.

According to a criminal complaint, Longstreet was one of two juveniles brandishing firearms in the altercation with Hudson, the other being 18-year-old TaeShawn Adams-Wright.

In his Tuesday update, Police Chief Hodges added that shell casings recovered at the scene “matched those that have been found in several shooting crime scenes in Minneapolis and St. Paul over the last year-and-a-half,” though he did not comment further due to the ongoing investigation.

As Crime Watch Minneapolis reported, casings from three guns were found, including 9mm and .40 cal, the latter of which apparently came from Hudson’s gun.

About the author: Evan Stambaugh is a freelance writer who had previously been a sports blogger. He has a BA in theology and an MA in philosophy.