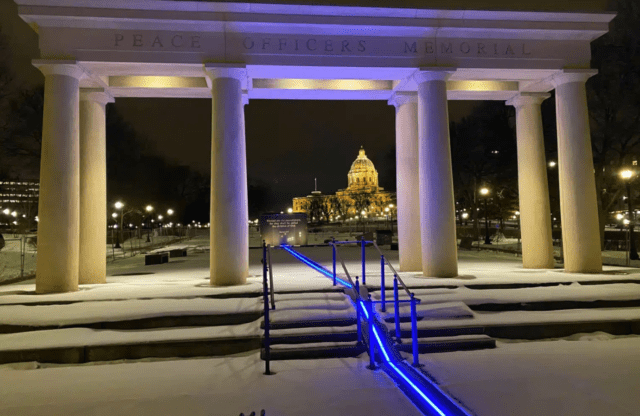 GOLDEN VALLEY, Minn. – The chief of the Golden Valley Police Department issued an apology for unintentionally “offending” some people with a law enforcement appreciation post on social media.

In a statement last Friday, Police Chief Virgil Green said he “sincerely” apologizes for a social media post made on National Law Enforcement Appreciation Day, which was Monday, Jan. 9, that included an image of the “thin blue line” flag.

“For many, the thin blue line flag has always represented a way to honor the commitment we make as first responders to protect our community,” Green wrote. “It is disappointing that in recent years the flag’s positive intention has been tarnished with divisive undertones and actions. We do not want to promote these negative connotations.”

Green’s statement included a link to an article from The Marshall Project titled “The Short, Fraught History of the ‘Thin Blue Line’ American Flag,” which was published in June 2020 amid the nationwide George Floyd riots.

“The controversial version of the U.S. flag has been hailed as a sign of police solidarity and criticized as a symbol of white supremacy,” reads the article’s subheading.

The appreciation post was pulled from the Golden Valley Police Department’s social media pages after Green “saw and read the comments from some community members.”

“In the future, the Golden Valley Police Department will use images that do not bring unwarranted controversy between the police and the public,” the police chief added.

Alpha News reported last year that Green, who was sworn in as Golden Valley’s police chief in September, had bounced around several police roles in Oklahoma and Arkansas over the previous years, and had unsuccessfully tried to sue at least two former employers.

His swear-in date as Golden Valley chief of police had also been delayed more than once because he had yet to take and pass a licensing exam to work as a police officer in Minnesota.

In 2021, the Sartell Police Department removed “thin blue line” decals from its squad cars after an activist complained.

The Los Angeles Police Department recently removed a thin blue line flag from the front desk at a station “after receiving a complaint from a community member saying the flag represents extremist views,” according to Fox 11.