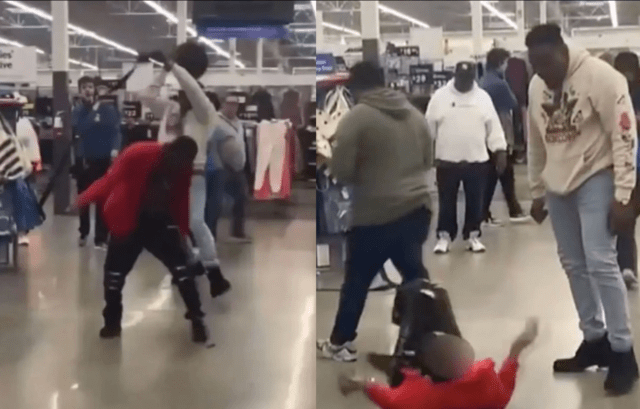 COLUMBIA, S.C. – A military veteran lowered the boom on a knife-wielding suspect who was threatening customers and employees at a South Carolina Walmart last Wednesday, video of the take down revealed.

The man was shouting and menacingly brandishing a pocket knife inside the store in the city of Columbia, threatening to cut people, according to the Richland County Sheriff’s Department.

Veteran Demario Davis was shopping with his son when they spotted the crazy-acting man. Davis waited for the opportune time to intervene, he told Fox News.

“I was at the checkout when my son noticed the guy walk in with the knife open,” he said. “He then proceeded to the service desk waving the knife at a few female employees.”

The vet heard the suspect yell, “When the cops get here, I’m going to start cutting you all up.”

Davis said he watched another customer try take action, but the unpredictable knife-wielding suspect made an effort to cut him in the face.

“That’s when my military training kicked in and I casually walked over to the object not only to take him down but also protect myself in case I failed, but with my great military training, I was able to neutralize the threat until law enforcement arrived,” Davis told Fox News.

The “object” appeared to be a stanchion that was present inside the store.

Video shows Davis grabbing the stanchion and smacking the suspect over the head from behind. The perpetrator falls to the ground, dropping the knife, while another customer quickly secured the weapon, the New York Post reported.

Additional customers held the man down until deputies arrived on scene and took him into custody.

“My first instinct was to neutralize the situation so I just casually walked over and waited until I had an opportunity to get him and I got em I guess. I’m a community person, so if I see something in the community that’s not right, with all the violence and things and attacks going on, gun violence you know, you want your people in the community to step up as well. The cops can’t do it all by themselves,” Davis said.

Sheriff’s officials said the man was transported to a hospital for treatment and evaluation.