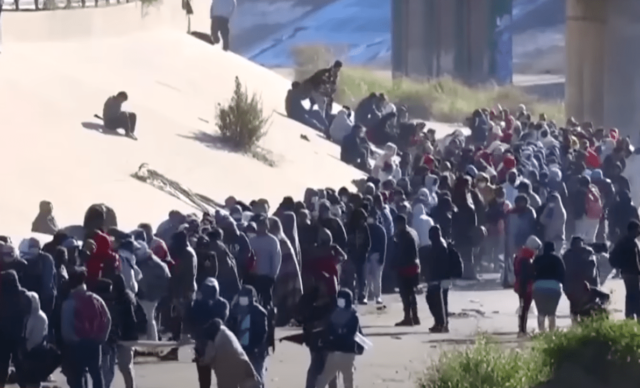 The U.S. Customs and Border Protection (CBP) released a new report showing the number of people on the nation’s terror watch list who are trying to cross the southern border has soared under the Biden administration.

CBP data shows an alarming increase from just three arrests of individuals on the terror watch list at the southern border in 2020 to nearly 100 in 2022, the Daily Wire reported.

Thus far in 2023 the rate is even higher, with a total of 38 individuals on the list that have been taken into custody at the southern border in less than a month, outpacing last’s year high of 98, according to the report.

Terror watchlist arrests at the southern border are surging under President Biden.

Per CBP sources, there have been approximately 1.2 million *known* gotaways since Biden took office. @FoxNews

CBP reported that 15 arrests of individuals from the terror watch list occurred at the southern border during 2021, Biden’s first year in office. What now appears to be a low number, it was still five times higher than Trump’s final year in office.

By comparison, during Trump’s four years in office, merely 11 individuals from the terror watch list were caught trying to sneak into the country. Biden’s defacto open border policy has opened the floodgate to undesirables trying to get in. During two years under Biden’s administration, 151 people on the terror watch list have been snagged by CBP.

Sadly, the high numbers under the current administration do not include an unknown number of “gotaways,” people who have eluded CBP as they’ve been pulled from the field to perform other tasks with a historic wave of border crossers.

According to the Daily Wire, CBP has estimated approximately 1.2 million “gotaways” under Biden’s leadership. However, the exact number is unknown.

CBP had 251,487 encounters with migrants last month, the highest number recorded in the nation’s history. With a record number of migrants entering the U.S. along with agents getting pulled from the field, and thus unable to detect surreptitious entry, the numbers will not recede anytime soon, thus making the U.S. incalculably vulnerable to terrorism.