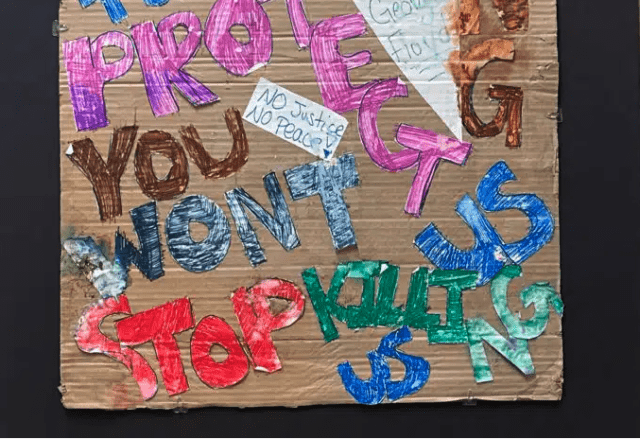 ST. LOUIS PARK, Minn. – A medical facility in St. Louis Park has installed an art exhibit that includes paintings and other social-justice “offerings” that were collected from George Floyd Square in Minneapolis.

Methodist Hospital, in conjunction with the George Floyd Global Memorial and Park Nicollet Foundation, revealed the showcase on Jan. 6.

“These expressions will serve as an inspiration and hope for all of us,” she claimed.

The title of the collection — which includes anti-police and pro-Black Lives Matter posters — is, “I Am Not You. You Are Not Me. Healing Begins with Acceptance.” The exhibit includes stations for “reflection” throughout the first level of the hospital and will run through March 3.

Among the most egregious aspects of the exhibit is a falsehood included on a flyer used to promote it.

“On May 25, 2020, Georgie Floyd was lynched by the Minneapolis Police Department,” the pamphlet reads.

The original post has been updated to show almost a dozen BLM pieces of “Art” on display at Methodist Hospital, many with anti-police sentiments. #TCNT pic.twitter.com/zNGMHBZmR3

The text appears to have been provided by the George Floyd Global Memorial non-profit, which describes the artwork as “offerings” that were left by protesters who visited George Floyd Square, the intersection in Minneapolis where Floyd died.

“The offerings in this rememory experience are organized with the understanding that the memorial, while birthed through the pain and grief of racial injustice, offers the possibility of healing. Designed with the hospital in mind, this exhibit invites patients, visitors, and employees to pause and embrace the mystery of how one person’s tragedy has the power to unlock healing,” the group says of the exhibit.

The pamphlet for the exhibit also asks readers to think about where they see “systemic racism” in the health care industry, suggesting that “when we accept the truth that this fight is in hospitals too, our healing begins.”

On the Park Nicollet Foundation’s website, a statement reads that they give money to programs that “create safe, caring environments … where patients can receive enriched, healing care.”

One patient told the hospital that she plans to seek care elsewhere because of the exhibit. In response, Myster said “these works of art are expressions of pain and hope and we expect them to produce strong emotions and reactions such as yours,” according to an email provided to Alpha News.

“The materials can be powerful reminders for many people in our community and we expect to hear divergent opinions on the works and what they represent,” she wrote. “The pieces aren’t displayed to serve as a chronological report of what happened; they’re there to show us the feelings and responses of people who were touched by George Floyd’s death.”

Former Minneapolis police officer Derek Chauvin was found guilty of murder in Floyd’s May 25, 2020, death, which set off several days of rioting in Minneapolis. He was sentenced to 22 years in prison. In a recent court filing, Chauvin claimed the riots and the media’s reaction to Floyd’s death “poisoned the jury against” him and prevented him from receiving a fair trial.