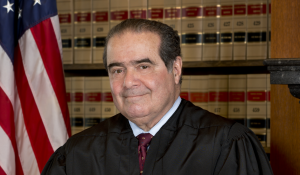 Emory Law School’s Professor Darren Hutchinson is getting a world of flack from right-wing media this week after telling his class that Justice Antonin Scalia was “basically a Klansman.” The word “basically” is doing a lot of work in that phrase so what is it, exactly, that Scalia wrote?

The lecture covered 1987’s McCleskey v. Kemp, rubberstamping the execution of a potentially innocent Black defendant on the grounds that evidence of systemic racial discrimination couldn’t unsettle a verdict unless the defendant could find some specific discrimination in the closed and sealed deliberations of the jury. Interestingly, forcing every question of discrimination to prove “specifics” rather than “general” actions is — for wont of a better word — “basically” the mission of the Klan and Jim Crow-era lawmakers.

And yet the majority opinion, from Justice Powell (fun fact: Powell explicitly called out this vote as one of his great regrets), isn’t the whole story here, because Antonin Scalia sent a memo to his colleagues during this case where he “conceded that he had all the proof of discrimination he needed, and reported his opinion that racial bias was both ‘real’ and ‘ineradicable.’” In Scalia’s own words:

Since it is my view that the unconscious operation of irrational sympathies and antipathies, including racial, upon jury decisions and (hence) prosecutorial decisions is real, acknowledged in the decisions of this court, and ineradicable, I cannot honestly say that all I need is more proof.

Scalia urged colleagues to ignore evidence of racial bias — in a death penalty case — not because it was inaccurate, but because he thought racial bias is ineradicable so… them’s the breaks! Got it.

But this comparison got Fox News very out of sorts:

Scalia served on the Supreme Court from 1986 until his death in 2016. He famously maintained a close relationship with Ruth Bader Ginsburg – a progressive justice who viewed the Constitution as a live document, with judicial opinions that were generally in stark contrast with Scalia’s.

This is the first paragraph that Fox offers in response to this claim. This is the “he couldn’t have committed this tax fraud… he has a puppy” of defenses. Both because it’s immaterial and because it tends to show how guilty the witness (in this case Fox) really thinks he is.

Scalia was not, in fact, a Klansman.

Generally speaking, it’s nonsense to invoke the KKK haphazardly. Not so much because it incorrectly slurs people as racist, but because it gives apologists broad license to blow off demonstrable racial bias by quibbling over the fairness of an extreme comparison. Like this non-sequitur from College Fix.

The late justice was a devout Catholic, which made him a member of a group targeted for violence and hatred by the KKK.

Seemingly not devout enough to oppose the punishment deemed a sin by his Church and literally the policy that murdered Jesus. Render unto Caesar, I guess.

To be clear, the professor didn’t say Scalia was a member of the KKK, he said he “basically” was in the very narrow context of calling out the jurist for pushing a legal theory that blessed the KKK’s long-time criminal justice aims.

I’m cautious of the liberal application of adverbs, but this is why we have them.

The professor called out Scalia specifically because, despite the complicity of judges/justices up and down the system to reach this opinion, only Scalia is known to have told his colleagues that proof of bias shouldn’t sway their votes. Even if Scalia held no racial animus at all, this memo satisfies “basically” by seeking to enshrine a Klan-sponsored legal strategy.

Don’t worry: because Fox News mentioned it, thirsty right-wing talking head Jonathan Turley is all over it.

The case has long generated debate with many law professors disagreeing with the Court’s holding. However, one can disagree with the Eleventh Circuit and the Supreme Court without labeling such jurists as white robbed racists.

It is also concerning that this is a reference to Hutchinson’s class. If the professor maintains that anyone supporting the decision is effectively a klansman, it is hard to see how students in his class would feel comfortable in voicing such a view. Indeed, such pedagogical positions may explain why 60 percent of students reportedly fear sharing their views in classes.

Folks in class these days don’t feel comfortable defending Dred Scott either, yet somehow everyone manages to learn the material. It’s “weapons grade ivory towerism” leaning into the idea that learning requires some sort of remedial class dialectic. Law school doesn’t need someone to advocate for killing a Black man regardless of overwhelming evidence of bias, it needs arguments about how courts evaluate a “specific” bias standard in a system designed to shield individual matters from inquiry.

If some FedSoc dumbass wants to argue, “well, I also agree that this court was biased, but shrug emoji” then they are a bad future lawyer.

Joe Patrice is a senior editor at Above the Law and co-host of Thinking Like A Lawyer. Feel free to email any tips, questions, or comments. Follow him on Twitter if you’re interested in law, politics, and a healthy dose of college sports news. Joe also serves as a Managing Director at RPN Executive Search.