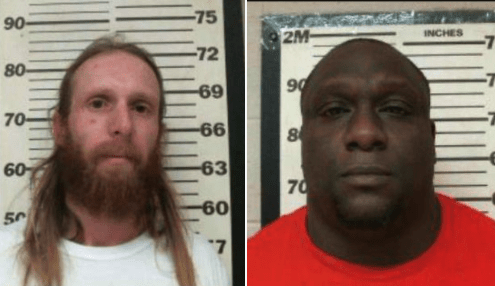 RIDGELAND, Miss. – A former NFL football player and an accomplice were arrested and charged with kidnapping Thursday, authorities said.

The suspects have been identified as Jerrell Powe, 35, of Buckatunna, Mississippi, and Gavin Bates, 35, of Roseville, California, according to Ridgeland Police Chief Brian Myers.

Powe, who is an ex-professional football player, and Bates were encountered by police at Chase Bank on Highland Colony Parkway in Ridgeland, Mississippi, after a person contacted officers claiming to have been abducted. Both men were arrested and charged with kidnapping, according to WAPT-TV.

Myers said the crime began about 75 miles away in Laurel, Mississippi, and ended in Ridgeland when the victim was able to contact Ridgeland police, telling officers he was taken “against his will” and was “forced to withdraw money” at the bank, KFYR-TV reported.

This is wild!! A Laurel man ended up at Chase Bank on Highland Colony Pkwy in Ridgeland saying he’d been kidnapped and forced to withdraw money. Suspects Gavin Bates, 35, of California and Jerrel Powe, 35, of Buckatunna, MS (it’s in Wayne County) are charged with kidnapping. pic.twitter.com/0XQcwTUrED

The victim is safe, Myers said. The name of the man was not released and police continue to investigate the crime.

Meanwhile, both Powe and Bates were booked on one count of kidnapping and held without bond at the Madison County Jail. They were expected to appear in court on Tuesday, according to the Western Journal.

Powe played football collegiately at Ole Miss from 2008 to 2011. The defensive tackle entered the NFL as a sixth-round draft pick of the Kansas City Chiefs in 2011. In three seasons with the Chiefs, he played in 12 games, recording eight tackles and one sack, according to ESPN.

Powe signed with the Houston Texans in 2014 where he appeared in 16 games making 10 tackles. He signed with Washington twice, in 2015 and 2016, but never played a game with the team, ABC reported.