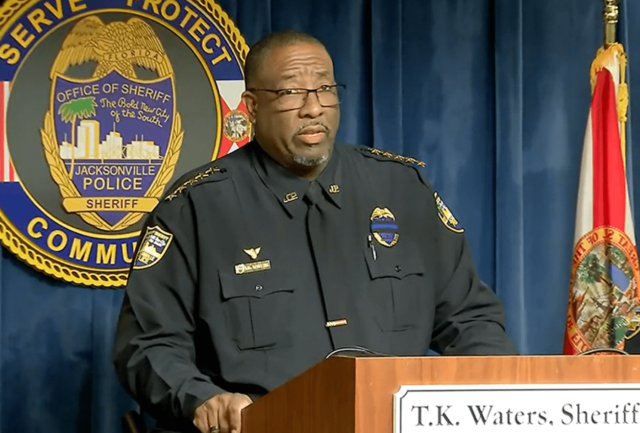 JACKSONVILLE, Fla. – An officer with the Jacksonville Sheriff’s Office suffered a gunshot wound to the face in Northwest Jacksonville Friday evening during an encounter with a residential burglary suspect, who was subsequently killed in an exchange of gunfire, according to law enforcement authorities.

JSO officers responded to a report of a residential burglary about 5:30 p.m. While conducting follow-up investigation, they located a possible suspect a short distance away about 6:30 p.m. The suspect was non-compliant and fired at the officers. Each officer at the scene returned fire and the suspect died, according to Sheriff T.K. Waters.

The wounded officer was taken to the hospital after suffering injuries that are non-life-threatening, the sheriff said, according to Fox News Digital.

“I am fortunate that we didn’t lose an officer tonight,” Sheriff Waters said at a press conference Friday evening. “People think it’s a cliché that officers just want to go home safely every night but there’s no further testament like what happened tonight.”

#JSO is currently working an officer involved incident in the area of Hardee Street and 3rd Street. Please stay out of the area and shelter in place of in the immediate area. More to follow. pic.twitter.com/tEKuS19fnJ

The sheriff said the shooting took place about two blocks from the location of the residential burglary.

“The officers were following up on that burglary, and at about 6:30 p.m., they located a suspect and a suspect’s vehicle at the 1800 block of Hardee St.,” he said, noting the suspect was asleep in the back seat of the automobile.

UPDATE: @jsosheriff TK Waters giving update. Says there was a burglary at home on Northside around 530p. Says officers later located suspect vehicle on Hardy. Sheriff says officers approached vehicle and saw a handgun on top of the car & a person sleeping inside. @ActionNewsJax

“They approached the vehicle, spoke to a resident of the house at that location, and found out who was inside the vehicle,” Waters added.

The sheriff said officers were also able to track some of the stolen items — bicycle and electronic equipment — that were taken from the residential burglary.

Sheriff says the suspect had several past dealings with local law enforcement. Sheriff says they will work to get body cam video out quickly as possible (after it goes through process of being reviewed by State Atty’s Office). @ActionNewsJax

There were five JSO officers at the scene and they noticed a firearm was resting on top of the suspect vehicle. The weapon was removed and officers formulated a plan to confront the suspect, Fox reported.

“They made a plan to open the door, not go inside, and have a conversation with him [the male suspect],” Waters explained.

“They asked him to show them his hands on several occasions, like seven or eight times, from different officers,” he continued. “They asked him also to get out of the car.”

The suspect remained non-compliant and refused officers commands. He told police not to point the flashlight in his face, and “for an unknown reason” opened fire on the officers, Waters said.

The sheriff said the round fired by the suspect grazed the left side of the unnamed officer’s face.

“Officers returned fire, all five of them, striking him several times [and] killing him at the scene,” the sheriff confirmed.

Law enforcement authorities did not know why the firearm was placed on top of the vehicle. Naturally, follow-up investigation will be conducted to determine who owned the weapon and/or where it originated in addition to the one used by the gunman.

Per department policy, all five officers were placed on administrative leave, the sheriff explained, while also saying he was “grateful” they are alive and safe.

The officer-involved shooting is being investigated by JSO and the State Attorney’s Office.