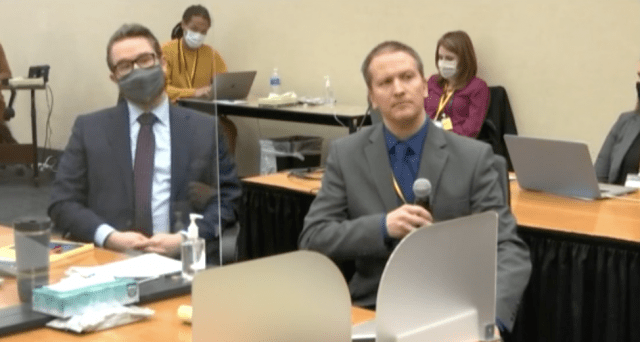 The appeal is asking for one of three things: a retrial, a reversal of conviction, or resentencing on the state conviction.

The hearing began at 9:30 a.m. Wednesday and was livestreamed. It was expected to be a short hearing with each side receiving 15 minutes to present their case to a panel of three judges on the Minnesota Court of Appeals.

William Mohrman, Chauvin’s current attorney, will argue that Chauvin did not get a fair trial in Minneapolis because of the “pervasive pretrial publicity and the riots which occurred in the Twin Cities.”

“The primary issue on this appeal is whether a criminal defendant can get a fair trial in a courthouse surrounded by concrete block, barbed wire, two armored personnel carriers and a squad of National Guard troops, all of which or whom are there for one purpose — in the event the jury acquits the criminal defendant,” he said.

Chauvin was transferred from Oak Park Heights prison to a federal prison in Tucson, Ariz., in August after pleading guilty to a federal civil rights charge. He will appear virtually Wednesday morning and not be brought back to Hennepin County for the appeal.

Chauvin’s mother, Carolyn Pawlenty, told Alpha News her son was wrongfully accused and did not receive a fair trial.

“The trial was based on facts that were changed, evidence withheld and false testimony. This appeal is to bring to light all the true, unedited facts of the case,” she said.

Pawlenty said she has been encouraged as more of the facts have been brought to light in the bestselling book, “They’re Lying: The Media, the Left, and the Death of George Floyd.”

“I have been contacted by many supporters from around the world, who have opened their eyes to the deceit the state had fed us. Derek was wrongfully accused. It is time to correct the injustice that was perpetrated against a good, caring, innocent man. It is my mission to get the verdict reversed and to get Derek his freedom,” she said.

Typically, the Court of Appeals issues a ruling in 90 days, but it’s possible this case may take longer to decide.