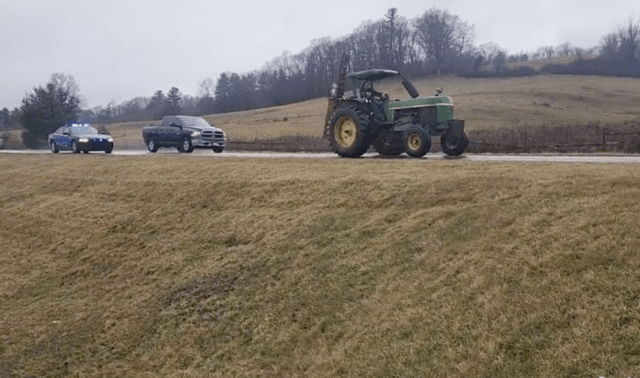 BOONE, N.C. – A crazed North Carolina man who was recklessly operating a stolen tractor by striking several vehicles and a church building, led law enforcement authorities from multiple agencies on a lengthy pursuit on Tuesday, according to police.

Officers were alerted to a tractor driving “erratically” in a local parking lot. The driver of the tractor — identified as Ronnie Hicks — “hit several vehicles, a dumpster and a church,” the Town of Boone Police Department noted on Facebook.

“What a day… So, many of you have heard, or have seen the videos, that we got in a pursuit with a tractor. The stolen tractor was being operated by a person who we are very familiar with, Mr. Ronnie Hicks. We received a call about the tractor being driven erratically in a parking lot trying to hit pedestrians and did in fact hit a vehicle off 421 on the east side of town. He actually hit several vehicles, a dumpster and a church. We are still trying to sort it all out.”

Continuing, Boone Police Chief Andy Le Beau wrote, “We did attempt to use stop sticks, but they were not terribly effective on the tractor. Our officers where (sic) concerned for the welfare of our citizens as Mr. Hicks was intentionally driving the tractor toward on-coming traffic. Mr. Hicks also intentionally rammed a Boone Police vehicle. Once he turned onto Old 421, we were next concerned about Parkway Elementary and were determined not to let him get that far. When the tractor was in an isolated area, one of our officers shot the tires of the tractor (with my authorization) since the spike strips were ineffective. The Tractor then turned onto Elk Creek Rd. After a few miles of driving without a front tire Mr. Hicks turned onto a private drive and ran out of road.”

After pursuing Hicks driving the stolen John Deere for more than an hour, he was finally apprehended, Chief Le Beau said.

“Mr. Hicks then jumped off the tractor and was wielding a knife. A Boone officer utilized a Taser, and the suspect was taken into custody without injury to the suspect or the officers. Fortunately no injuries occurred throughout this incident.”

Journalist Jeremy Markovich tweeted a video on Tuesday, noting that the Boone police chase “topped out at 20 miles per hour,” Fox News reported.

“There was a police chase this morning in Boone involving a John Deere tractor that lasted for more than an hour and topped out at 20 mph and YES THERE IS VIDEO,” he wrote.

There was a police chase this morning in Boone involving a John Deere tractor that lasted for more than an hour and topped out at 20 mph and YES THERE IS VIDEO https://t.co/IFZxSZNR2i pic.twitter.com/GAIlzEkfvP

“It just doesn’t seem like this should be happening in Boone…,” Le Beau concluded.