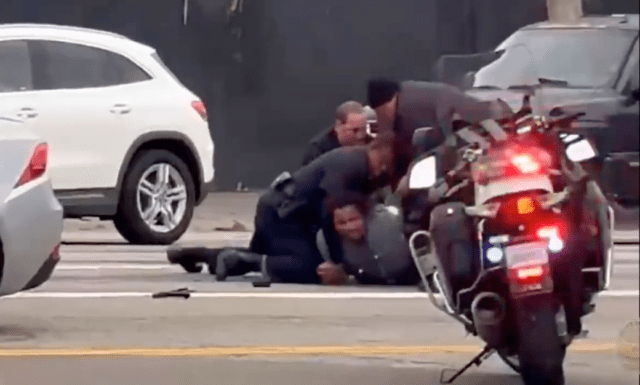 LOS ANGELES – On January 3, a cousin of Black Lives Matter co-founder Patrisse Cullors died after fighting with LAPD officers and getting tased during an arrest for allegedly committing a felony hit & run and attempted auto theft. A toxicology test found cocaine and cannabis in his system, the Post Millennial reported.

LAPD Commanding Officer of Media Relations Captain Kelly Muniz said that an officer was flagged down for a traffic collision near Venice Boulevard and Lincoln Boulevard in Pacific Area at 3:38 p.m. on Jan. 3. Keenan Anderson was initially detained for a DUI investigation. However, he later fled on foot.

Officers caught Anderson and a physical altercation ensued. During the use of force encounter, Allen was tased and taken into custody.

A “cousin” of #BLM co-founder Patrisse Cullors (the one w/the multi-million dollar homes) died after committing a felony hit & run, trying to steal a car, resisting arrest & getting tased by LAPD. He tested positive for cocaine. Cullors is calling for the police chief to resign. pic.twitter.com/ZQYlWDaIub

Shortly afterward, Allen was transported to a local hospital where he went into cardiac arrest and died.

On January 3, 2023, at around 3:38 p.m., a West Traffic Division motor officer was flagged down for a traffic collision in the area of Venice Boulevard and Lincoln Boulevard in Pacific Area. He observed a male, later identified as Keenan Anderson, running in the middle of the street and exhibiting erratic behavior.

Several citizens involved in the traffic collision motioned to Anderson, indicating that he caused the accident. The officer contacted Anderson, verbalized with him, and requested additional units for a DUI investigation.

Anderson initially followed the officer’s commands and sat at the northeast corner of Venice and Lincoln Boulevard for several minutes as the officer spoke with him. As additional units arrived at scene, Anderson suddenly attempted to flee the location.

Officers gave chase as Anderson ran eastbound in the middle of the street on Venice Boulevard. As officers contacted Anderson, he began to resist, resulting in a use of force. Officers struggled with Anderson for several minutes, utilizing a TASER, bodyweight, firm grips, and joint locks to overcome his resistance. Anderson was subsequently handcuffed and hobbled at the ankles.

Shortly after Anderson was taken into custody, Los Angeles Fire Department (LAFD) personnel responded to the scene and rendered medical aid for deployment of the TASER. Anderson was transported via a rescue ambulance (RA) to a local hospital in the City of Santa Monica. While at the hospital, Anderson went into cardiac arrest and was pronounced deceased.

One officer received minor abrasions to his hands during the use of force. Detectives from Force Investigation Division responded to the scene and are investigating this incident.

On Wednesday, LAPD provided the following community briefing regarding the incident:

Cullors acknowledged on Instagram that Anderson was related to her, writing in part, “This is my cousin Keenan Anderson. He was killed by LAPD in Venice on January 3rd, 2023.”