Home » After Text Calling Maternity Leave ‘Sitting On Your Ass,’ Law Firm Looks To Sit On Its Ass In Response
Legal

After Text Calling Maternity Leave ‘Sitting On Your Ass,’ Law Firm Looks To Sit On Its Ass In Response 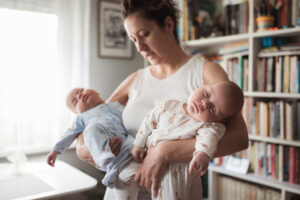 A senior attorney at a Cleveland law firm texted a former associate a furious message threatening to sabotage her future job prospects and characterizing maternity leave as “collecting salary from the firm while sitting on your ass.” Bold take from a labor and employment attorney!

We’ve since confirmed that the author of the text was Jon Dileno of Zashin & Rich, a lawyer representing “most of the Cleveland area’s largest public sector employers” including a number of municipalities. Indeed, a quick search turned up an opinion where Dileno represented the City of Cleveland and the Sixth Circuit described his advocacy as making “a passing head fake at a potential legal issue,” after noting that it “flouts precedent” and “has a fatal jurisdictional problem.” We’ve reached out to the Cleveland Law Department to see if they have anything to say about their outside counsel’s texting habits and haven’t heard back.

In the meantime, Zashin & Rich managing partner Stephen Zashin issued a statement on the matter and it’s… not particularly encouraging.

Recently, I became aware of an inappropriate and unprofessional text that was sent by an employee at our firm to a former employee.

That single text was sent in the heat of the moment by an employee upset by the belief that the former colleague while on paid leave sought employment with another law firm. Within days of her return to work, she took that new job. That’s not an excuse for the offending text, which should not have been sent. That single text has prompted some to question our commitment to fair treatment, diversity and other values that our firm holds dear and believes in fervently.

Maybe you can get away with “heat of the moment” over a phone call, but someone initiated a text conversation, typed a bunch of characters, and edited that message, unless he owns the only smartphone in existence that doesn’t screw up autocorrect. That’s not heat of the moment, that’s a sustained lack of professional judgment.

And the text indicated that Dileno had recommended firing the associate during maternity leave for just interviewing. At the absolute best, it was “heat of the moment” to admit this, but it’s evidence of a toxic and misogynistic culture that it got suggested in the first place.

At least the firm acknowledges the problem and recognizes that it has, in fact, led the public to question the firm’s “commitment to fair treatment, diversity and other values.” But that’s the absolute bare minimum.

It doesn’t get better from there:

I stand on our firm’s record of how we treat our employees. Zashin & Rich prides ourselves on focusing on supporting working parents with modified schedules and other accommodations. For more than a decade, we have offered open-ended paid leave, for maternity, paternity and other forms of medical leave. Numerous current employees, women and men, have availed themselves of this benefit. We do this because we believe it’s the right thing to do.

Well, the firm definitely offers paid leave! That’s how we got here. It’s also how we ended up with someone in a senior position who, at least on the face of his text, not only believes in firing a woman on maternity leave but feels empowered to share that suggestion with management.

That’s the fundamental problem with this whole statement. The text is inappropriate and toxic but it’s also not an isolated incident if the guy actually suggested firing the associate while on leave. If anything close to that happened, the firm could diagnose its cultural problem weeks before this text and the fact that it didn’t do anything until the text went public casts doubt on the sincerity of this statement.

As a result of this incident, the firm is taking corrective action. We are taking a purposeful look at our culture and what may need to change.

While we cannot undo the past, we can change the future. We are committed to turning this negative into a positive.

The firm would be better off saying that they’re still investigating than blasting out that they’ve considered the facts and dismissed this all as a “heat of the moment” exchange and will only commit to vague, mealy mouthed “corrective action.” This firm does labor and employment work! It should know what a corrective action looks like!

Earlier: ‘Collecting Salary From The Firm While Sitting On Your Ass’ Is Certainly ONE Way For A Partner To Describe Maternity Leave

Joe Patrice is a senior editor at Above the Law and co-host of Thinking Like A Lawyer. Feel free to email any tips, questions, or comments. Follow him on Twitter if you’re interested in law, politics, and a healthy dose of college sports news. Joe also serves as a Managing Director at RPN Executive Search.