In 2022, a total of 331 police officers were shot in the U.S., a 6% increase from 2020, according to information from the National Fraternal Order of Police. Of officers who suffered gunshot wounds in the line of duty, 62 were killed, up 32% from 2020, the New York Post reported.

“This past year has been one of the most dangerous years for law enforcement in recent history due to the increase of violence directed towards law enforcement officers as well as the nationwide crime crisis, which has seen criminals emboldened by the failed policies of pandering prosecutors and cynical politicians,” said Patrick Yoes, president of the National FOP. 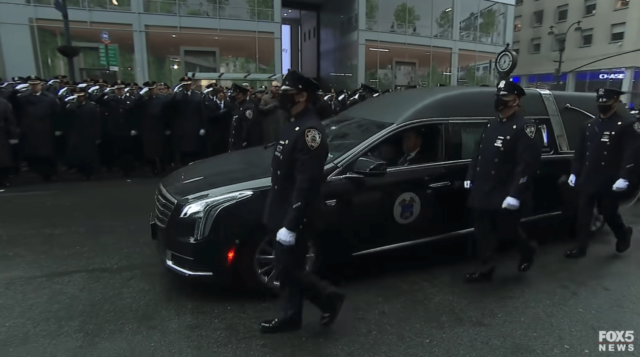 “Perhaps not since America welcomed its victorious legions home from Europe in 1945 have New York’s streets seen a uniformed presence quite like the blue wall that stood tall in Fifth Avenue Friday,” the New York Post reported in January 2022. Sadly, they were there to mourn the death of NYPD Officer Jason Rivera. (YouTube)

Although last year’s tally was grim, it was slightly down from 2021 when a record 346 officers were shot and 63 killed.